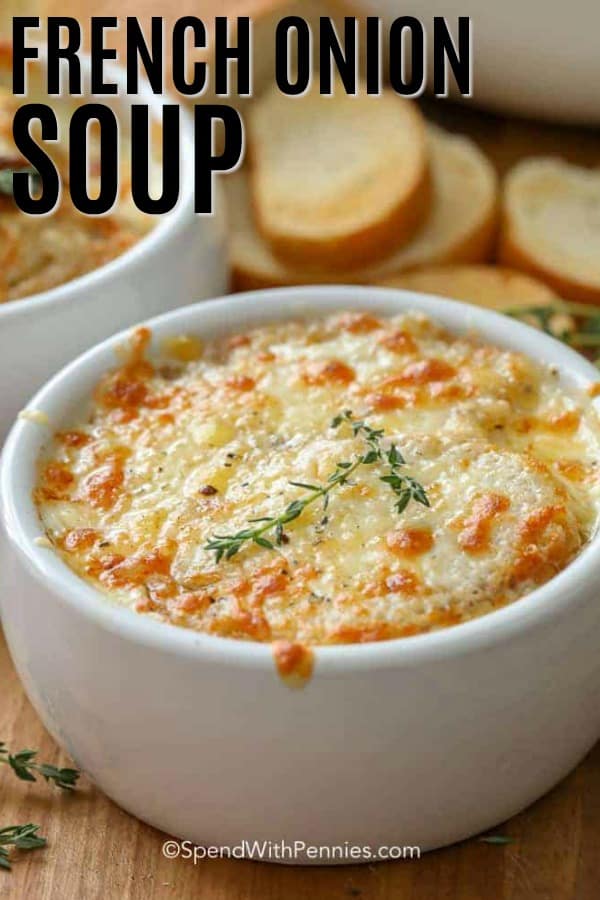 French Onion Soup is a classic soup recipe for good reason! Sweet caramelized onions are simmered in a rich beefy broth to create a soup base that is loved by everyone!

Of course the best part of any french onion soup is the crusty bread crouton topped with gruyere or swiss cheese and broiled until golden and bubbly! Who could ever resist? 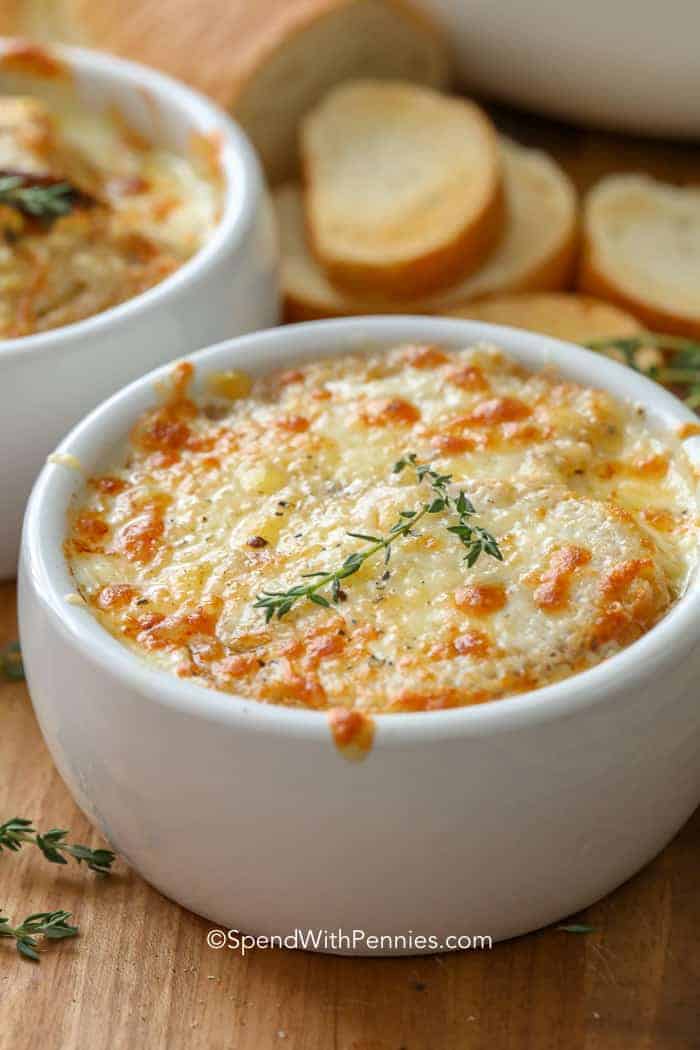 Walla Walla onions and Vidalia’s are large and sweet and meaty so a few will go a long way. I prefer to use half sweet onions and half regular yellow onions for just the right amount of sweetness.

Be sure to cook the onions slowly so they are uniformly golden and soft without browning. (Although you can also caramelize onions in the slow cooker the night before too)! If you’re using a sweeter onion, you can eliminate the bit of brown sugar.

What Kind of Cheese

Gruyere, which is a type of mild swiss cheese, is commonly added to top a french onion soup recipe. It has a mild flavor and melts perfectly over the bread.

There are no hard and fast rules for a cheese option; many people use a combination of mozzarella and parmesan cheese. Why not experiment with other soft, melty cheeses like Brie or Havarti, or even blue cheese crumbles?

Broiling: French onion soup can be broiled in almost any bowl on low. You can find french onion soup crocks online or at the dollar store. If you don’t have an oven safe bowl, simply broil the cheese over toast and add to your soup. 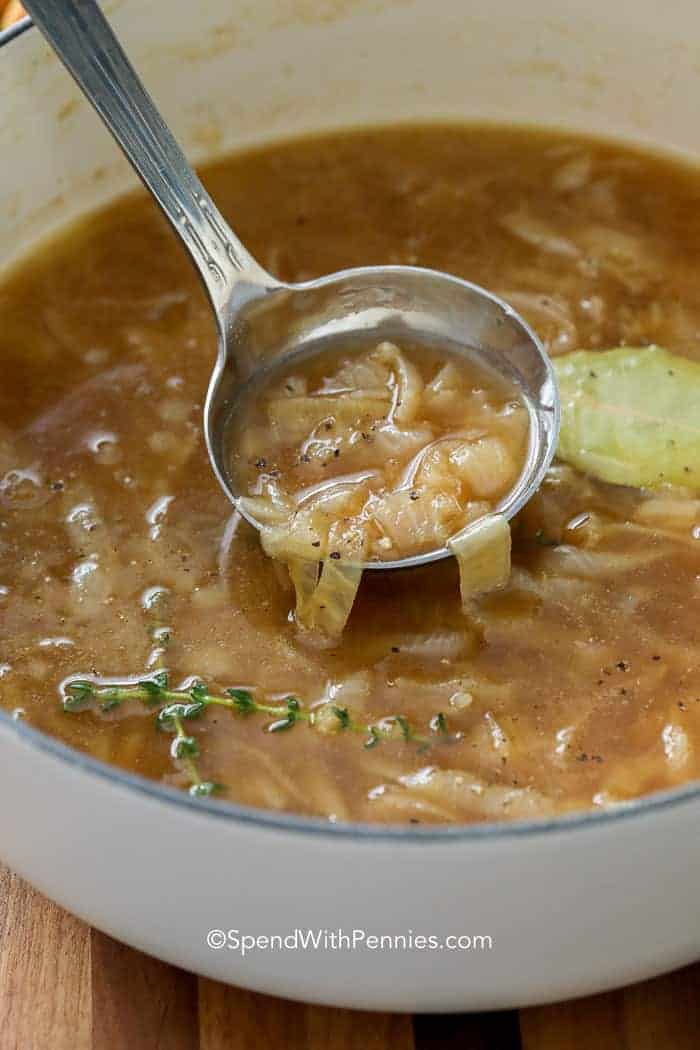 How to Make French Onion Soup

While I often make Slow Cooker Onion Soup, this stovetop French onion soup is one of my husband’s favorites! It does take a bit of time, but most of the time spent is hands off (simmering etc). 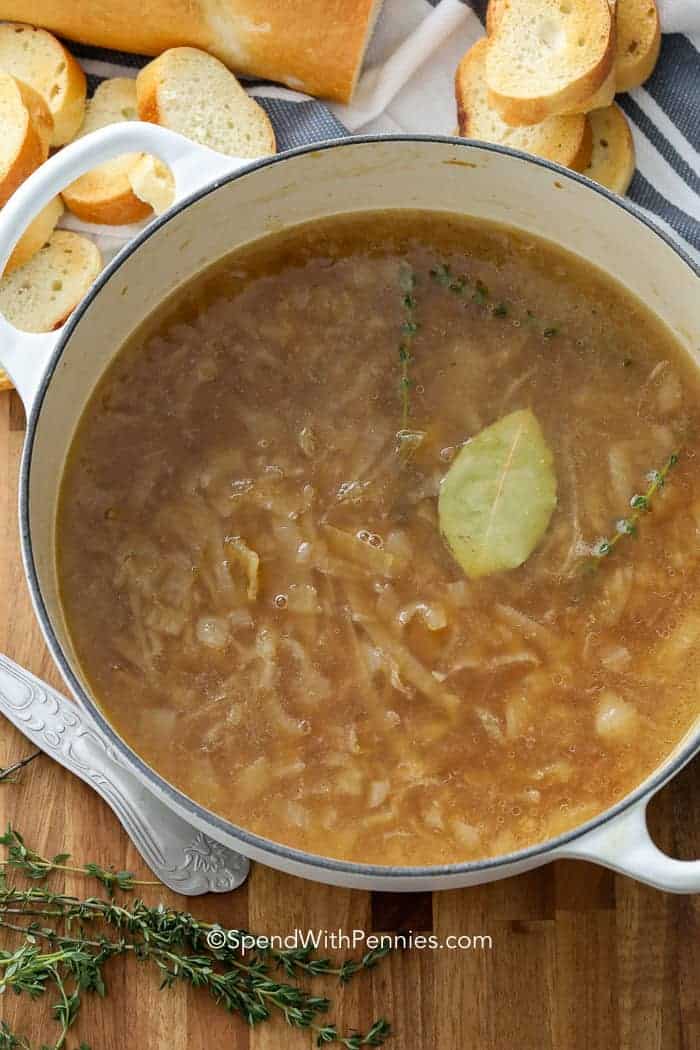 What to Serve with French Onion Soup

We serve it as a starter to a steak dinner or roasted pork tenderloin.

Eaten as a meal of it’s own, it can be paired simply with a salad, a side of sliced apples, pears and cheese or it can stand alone with extra crusty bread or seasoned croutons!  Any way you serve it, a classic French onion soup will be a go-to recipe all year round! 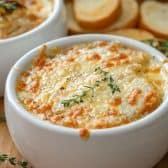 Sweeter varieties of onions may not need the sugar.

Course Appetizer, Soup
Cuisine French
© SpendWithPennies.com. Content and photographs are copyright protected. Sharing of this recipe is both encouraged and appreciated. Copying and/or pasting full recipes to any social media is strictly prohibited. Please view my photo use policy here.