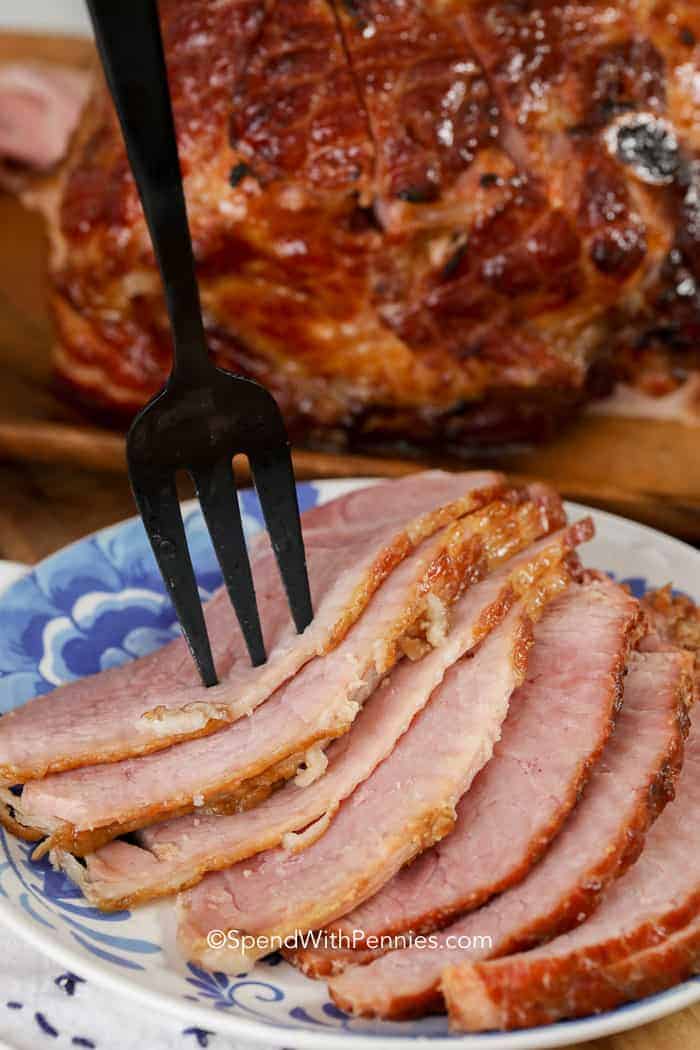 Baked Ham is my kids’ all time favorite meal!  They’d pass up a turkey dinner any day of the week (or any holiday) for ham.

This easy baked ham is moist, tender and delicious inside while the outside is brushed with a brown sugar glaze and caramelized for a hint of sweetness. We serve this baked ham for special occasions (like Easter and Christmas) but it’s simple enough to make any time of year! 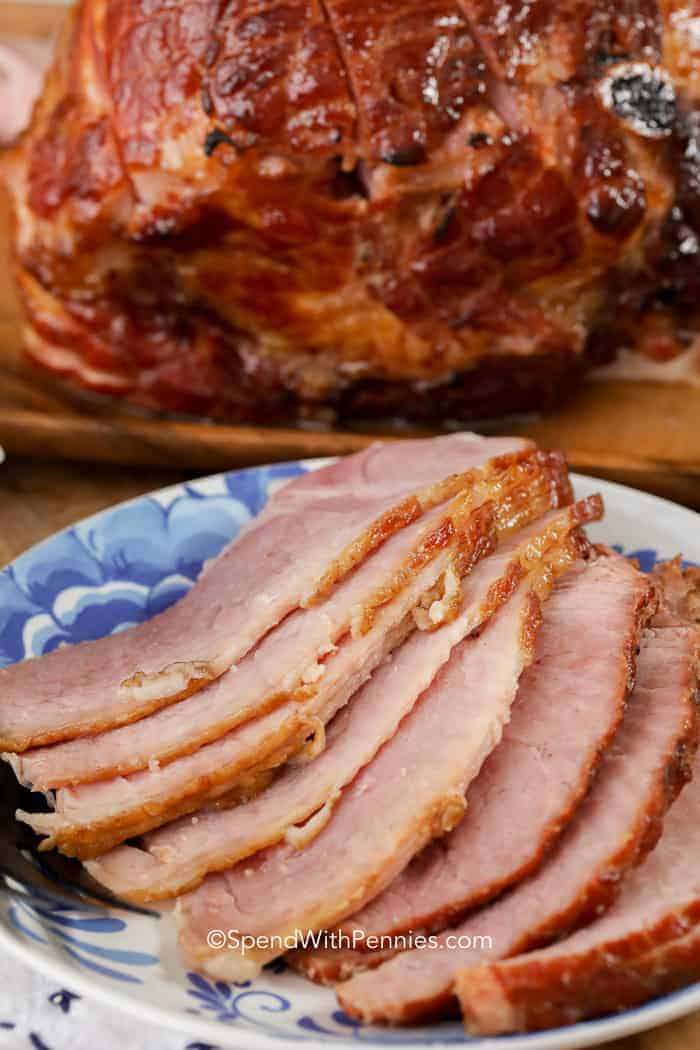 I’m not going to lie, I love turkey dinner (mostly I just love stuffing) but I’m kind of outnumbered around here because everyone else votes ham.  While I make Crock Pot Ham quite frequently since it’s so easy, I have to admit I truly love the roasted flavor that comes from making a deliciously glazed baked ham!

Baking a ham is not hard, you just need to watch the temperature to make sure it heats through without over cooking.  Adding a brown sugar glaze to baked ham takes it to the next level without being overly sweet.

How to Bake  a Ham

Most of the time when you purchase ham, it’s been smoked which means it’s cooked.  Be sure to check the package of your ham to see if it says fully cooked (and it should let you know the temperature to cook your ham to).

When cooking ham, you’ll want to preheat your oven and place the ham cut side down.

Cover the ham in foil and crimp the foil around your roasting pan (I use a 9×13 pan) to seal it. Brush with the brown sugar ham glaze before it finishes baking. 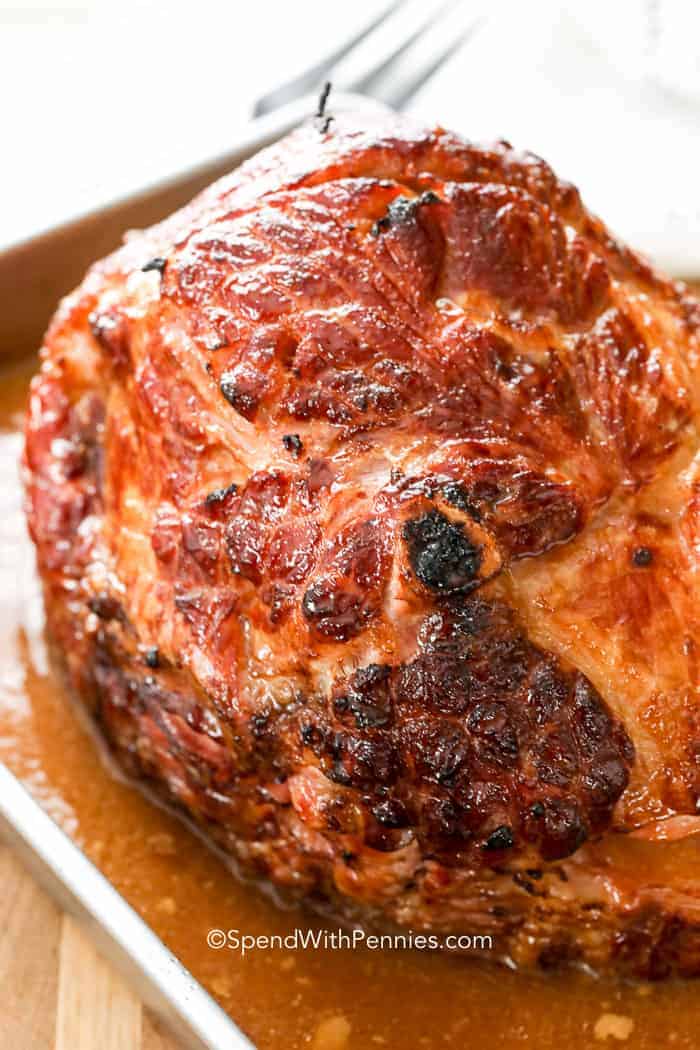 How long to Cook a Ham

This recipe uses a bone in ham since bone-in ham produces the best flavor and very tender meat (plus we like to have a leftover ham bone to make our favorite Crock Pot Ham and Bean Soup).

It is easy to overcook ham so to really make a perfect baked ham, I suggest using a thermometer like this one.

I have one and I simply leave in the ham while it cooks and monitor the temperature for perfect results. (I use if for everything from steaks to perfectly cooked Pork Tenderloin). They cost less than $20 and I think it’s truly a small investment to be able to produce perfect results when cooking (and to never have overcooked meat again)! You should also see a cooking guide on the package of the ham you buy for cooking times but a thermometer is most accurate. 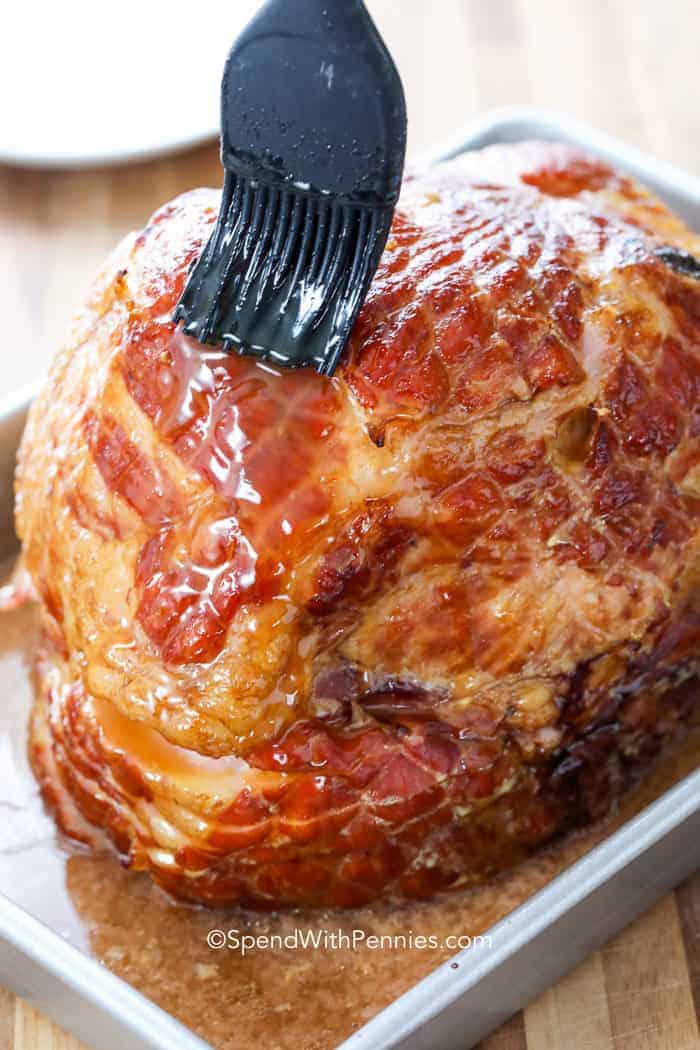 How to make Brown Sugar Glaze for Ham

In this recipe I add my favorite Brown Sugar Glaze for ham using, of course, brown sugar and a bit of pineapple juice (orange juice works great too). The glaze is flavorful without being too sweet and adding a delicious sticky coating to the outside of the ham.

I take the extra step (about 4 minutes of extra time) to thicken the glaze slightly because this makes it adhere to the ham much better.  You can use dark or light brown sugar in this recipe but dark brown sugar has a bit more flavor.

As with anything that is high in sugars, the brown sugar glaze can burn if left too long in the oven so it is just added for the last 15 minutes.

Once the brown sugar glaze is thickened and cooled, the ham is removed from the oven and the heat is cranked up high.  Brush the glaze over the ham and pop it back into the oven.  The high heat will make the most gorgeous golden glaze in just a few minutes!

Before carving your baked ham, let it rest 15 minutes to help keep it perfectly juicy.

How much ham per person

If you’re using a bone in ham, you’ll want about 3/4 pound of  ham per person and a bit more if you want leftovers (for Ham and Corn Chowder or Cheesy Ham and Potato Casserole). An 8lb ham should feed about 9 people.

What to Serve With Glazed Ham

This beautiful brown sugar ham is most often served at Christmas dinner or Easter dinner at our house! We serve it with our favorite sides for the perfect meal! 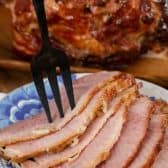 Author Holly Nilsson
Baked ham is moist, tender and delicious inside while the outside is brushed with a brown sugar glaze and caramelized for a hint of sweetness.
Print RecipePin Recipe

If you purchase a smoked ham, it has been cooked, be sure to check the package to ensure it says it is "fully cooked". If your ham is fully cooked on the package (as most spiral hams are), it will need to cook to 140°F (basically just to heat it). 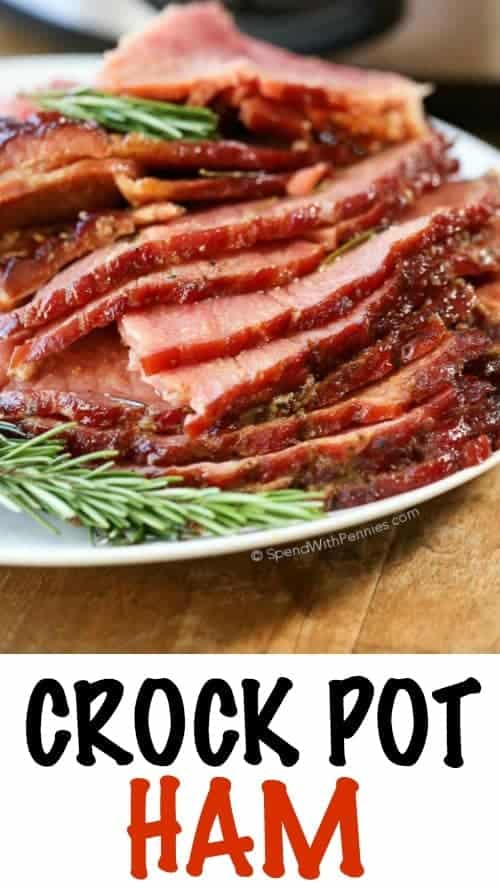 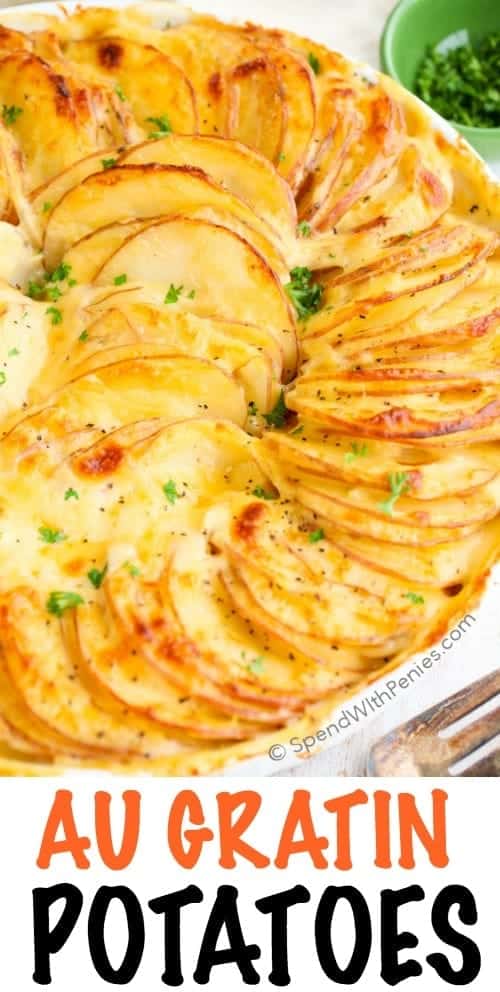