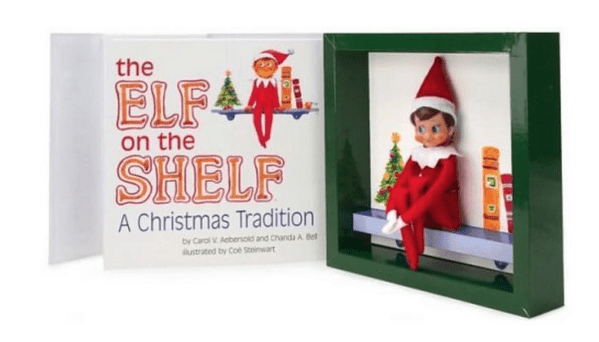 Leave your own great Elf on the Shelf ideas in the comments below to share with other readers!!

With Christmas fast approaching I see the buzz about the Elves making their appearance at little girls and boys houses and I’m sure you have too!

What exactly is Elf on the Shelf?

This is a fun tradition to start with your little ones!

When you adopt a special elf and name him or her, they receive Christmas magic!  As soon as everyone is sleeping,  your elf reports back to Santa whether you’ve been a good boy or girl that day.

The elf is moved around to different hiding spots each night so when the kids awake it becomes a hide and seek game.  Be careful… elves have been know to be a bit mischievous…  and can be found in the morning doing some pretty silly things!

Where to get an Elf on the Shelf…

If you don’t have an Elf on the Shelf and you’d love to start this tradition with your own family, you can get one on Amazon!  Last year they were sold out at most stores around me and I had a really hard time finding one!

The Elf on the Shelf – Girl

We have a new Elf addition to our family.  Her name is Ida.

She has lot of rascally escapades, so be sure to peek back!

(I’d love to see your elves too so be sure to send your photos if you’d like to share and you could be featured on Spend With Pennies!)

Fun Elf on the Shelf Ideas

Here are some fun ideas for your elf on a shelf this holiday season!

Grow your own candy: Have Elf on a Shelf overlooking a couple of potted plants, some cotton balls and “candy seeds.” The Elf on a Shelf would have left them instructions too! The “seeds” can be anything from beads to colorful pompoms to glitter. Have your children plant the seeds in the cotton balls. Once they go to bed, shove some lollipops in the planter, like the candy grew from the candy seeds!

Use letter blocks: Have your Elf bring some letter blocks with him, so he can leave messages for your children without breaking the rules.

A day at the spa: Grab a white dishcloth or other thin towel and make your elf a couple of towels, one to wrap around his waist and the other to wrap on his head. Hang him from the shower head, so he won’t get wet, and give your Elf on a Shelf a trip to the steam room.

Super elf: Make your Elf on a Shelf a superhero costume, and have her scaling the cabinets, climbing the wall, or “flying” on some fishing line.

The little vandal: Have your Elf on the Shelf play a prank and TP the Christmas tree or draw on a picture frame in dry erase markers. The kids will love to see mustaches and funny faces drawn over theirs in your picture frames! Best part? Dry erase markers are easy to clean up!

Have a party: Have a Barbie, your Elf and some other toys set up a party on shelf or above the TV. They can be playing a board game or maybe just watching a movie!

Snowball fight: Have two Elves build a marshmallow fort and throw marshmallow snowballs at one another!

Video gaming: If your children have a game system, hand your Elf on the Shelf one of the controllers. He loves to play games with the kids!

Go fishing: Grab a bowl of Goldfish. Have your Elf on a Shelf sit above the bowl with a fishing rod, made from a small stick and some kite string. Dangled the thread toward the fishing bowl full of Goldfish.

All wrapped up: Stage your Elf on the Shelf as though he was in the middle of wrapping some presents for the kids when he got all tangled up in the ribbon! Have him hanging from a shelf by some ribbon, the wrapping supplies and a poorly wrapped present on the shelf above.

Judy T: Put Elf inside the paper tube of a toilet paper roll and have him roll down the stairs leaving a trail of toilet paper behind him!

Brandy H: Tonight, we are going to TP the hallway and have “Pepper” dangling from it right in the doorway for the girls to find.

Sherry B: This morning he was a super hero and is hanging with a cape (a tissue ) and is flying on the van! 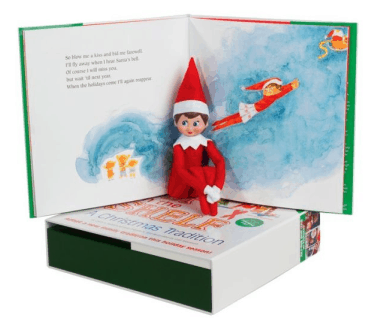 What is Elf on the Shelf?

What is Elf on the Shelf? 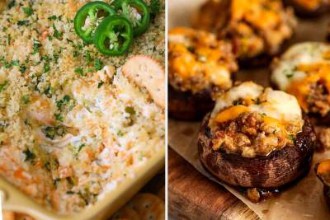 Home cooked Meals for every occasion. From quick and easy weeknight meals, so turkey dinner!